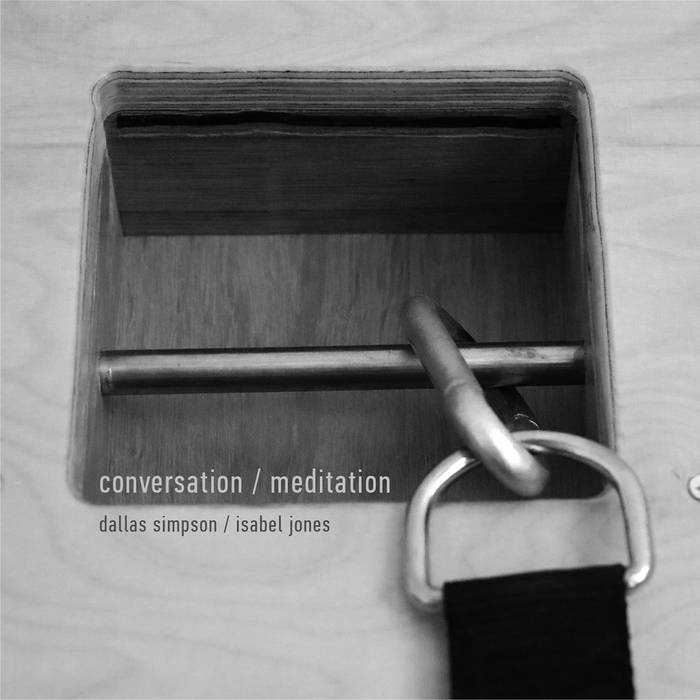 For this latest work i had the pleasure and privilege of performing a collaborative work with Yogini/Yoga Teacher and performance artist isabel jones at her studio. On arrival i met Isabel on the streets nearby her studio as i was parking my car, she was on the way to pick some blackberries from some nearby bushes. As i got out of the car i noticed an eco bicycle repair shop nearby and on the ground were a number of metal nuts, plastic valve caps and other small objects discarded from bicycle repairs done by the shop. The eco ethos being an important element of my work and of current thinking some of these items were collected and used, as found sound objects, in the improvisation.

This performance came about as a result of a conversation between myself and Isabel well over a year ago when we discussed the possibility of a collaborative sound work. For various reasons it never happened, until now.

The conversation sat in our front room beneath the studio, set the atmosphere of the occasion, as we embarked on a communication in sound, breath and objects, some of that intentional, some of that play, the influence of nature, the outside world of vehicles, people, work, and of prana coming in, while the necessity of practice and of time spent in the moment to bring my inner world towards stillness.

At the beginning, i carefully fold 2 cotton blankets, and sit very upright, to invoke the presence of sage Patanjali, the palms of my hands placed upwards to receive the falling leaves of wisdom, to support this daily practice; it’s a struggle, as i work with and am depressed by the force of gravity, from that i must press down to lift up, move my mind upwards to the breath, liberating myself from the limitations of time, age, body, allow nature to support me in a process of meeting prakrity (nature) and the atman (the true self) to free me from the constant fluctuations of my mind.

Yogah Chitta Vritti Nerodhah: Yoga is the cessation of the movements of the consciousness.

For the duration of the work, i hear dallas at play exploring the sonic potentialities of my simple yoga equipment and the space. While i spend a considerable amount of time in functional mode, a practice that has to be done, and precisely. Things must be straight that are meant to be straight, the body even on both sides balanced left and right, i must pair it down to its essence, and get on with it. No extraneous sound here, only the sound that needs to be there; the placement of a cork brick to hold my weight, folding blankets, a mat and a cotton belt, the necessity to kick up into hand balance, forearm balance, jump into standing poses, time a 10 minute headstand, preparing my shoulders for sarvangasana, the practice of pranayama, and the withdrawal of the senses in savasana/corpse pose. The practice, vigorous in places maybe, but silent only for the sound of the foot hitting the floor or wall, the breath, bhramari pranayama the hum of the Indian bumble bee, and the clock sometimes.

The wall and floor here built to support our weight was laboured into existence in sound: hold, lean, pass, wade, tamper, hit, channel, bend, saw, crawl, trowel, scrape, weld, shoulder, catch, sift, grip, drill, wack, bed, butt, anchor, sift, carry, drop, built out of bricks, wood, cement, steel, oak, ply, wire, conduit, baton, sand, clay, stone. The sound of this space is all around us, sound that was there all along but we didn’t hear until we were still enough to perceive it.

Prana; the life force, comes in unbidden, one day it stops when we die and we can’t do anything about it, but we can create a fertile climate in the body for this prana to change our mind. Waiting for permission from the environment, as Dallas talks of, is very resonant for me; it’s a process of allowing, sensing and honouring what is there, giving us the chance to enter into dialogue with nature. Being watchful of oneself, not expecting or going after big results, so that things can arrive gently, and we receive such gifts.

It’s a lot to do with energy, if its possible to listen, hear and work with what is there before we go piling in, then we can set up a practice that nurtures a peaceful environment. In yogic terms this is called Satva. A Satvic person or situation is sometimes hard to identify because it is quiet, not showy, and I think this is something of what we created together.

The work consists of two parts, the second part having two phases:

1) conversation - A conversation between isabel and myself about the motivation and historical context of the collaboration.

2) meditation - A sound art performance with both of us working in isabel’s studio at her home, which consists of two phases. First a prelude, where i, sonically introduce myself to the first room of the studio while isabel is preparing for her session in the main studio, and second, the meditation and performance, where both of us explore the main studio area.

The continuous audio is presented as three separate tracks:

The original continuous recording of 105 minutes has been minimally edited. Specifically, in the case of conversation, some short sections of personal conversation have been removed. In the case of meditation performance the total unedited performance was cut into approximately two halves, layered and mixed with an overlap between two parallel streams. All editing, layering, mixing and levelling was done using the Prism SADiE6 platform.