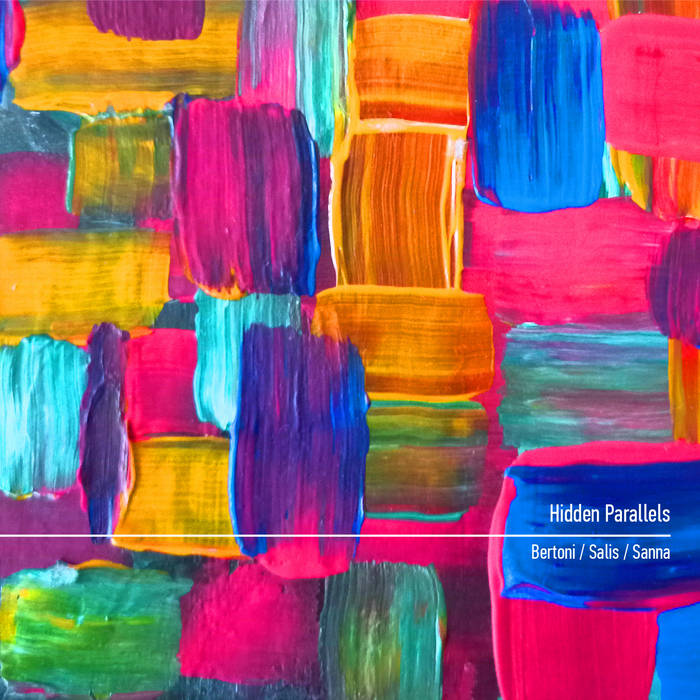 Mixed and mastered by Antonio Bertoni.

Hidden Parallels is the result of the collaboration between Antonio Bertoni and the two-piece ensemble comprising percussionists Giacomo Salis and Paolo Sanna.
The origins of the album’s sound lie in the contemplation of several concepts, first and foremost the concept of absence and presence.
Each of the three musicians proposed a piece by a composer of their choice. These pieces were then used as a starting point, an inspirational source for the creation of something completely new.
Sanna chose Penrhiw, a composition by the harpist Rhodri Davies, from the album Telyn Rawn (Amgen,2020), Bertoni picked Solo De Endingidi taken from Ouganda. Aux Sources Du Nil (Ocora, 1992), while Salis chose Morton Feldman’s Crippled Symmetry (hat ART,1991).
The original composition could be approached in different ways: through interaction with the track itself, by “stealing” its timbre solutions or retracing its structure. The original pieces are always there, a subtext that is never directly referred to, hence the concept of absence and presence.
Although absence and presence was the dominant concept, several others were involved in the genesis of this musical journey. Randomness (as a non-composing choice) and non-listening. In fact, it was decided to ignore one of the unwritten rules in improvisation, that is mutual listening. The artists played without listening to each other’s contributions, thereby emphasising the collisions and ruptures resulting from the joining together of each part they executed.

Nightmares on Wax and Bremer McCoy stop by with their sublime new LPs.